Fin & Tail Rot in Bettas & other Fish; Treatment and Prevention

Betta Fin Rot; Treatment and Prevention.
This applies to most ALL fish (from cichlids to arowanas), but since I get so many emails and questions pertaining to Betta Fish, I use Bettas as the main example/subject of this article (however this article applies to ALL aquarium fish!!). 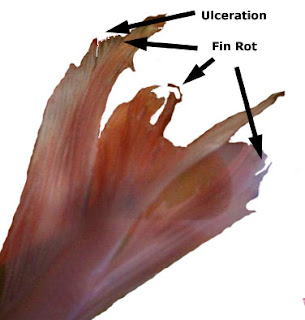 Let me first start out by noting that "Fin Rot" is a generic term that does not define any one disease, rather there are many causes of this Symptom; of which Fin Rot is better described as a symptom with more than one cause.

Often Fin Rot is brought on by injury (long finned fish in particular) or ammonia/nitrite poisoning, so when one considers either treating or preventing the symptom of Betta Fin Rot, these are first places to start.

As well opportunistic bacteria such as Columnaris, Pseudomonas, or Aeromonas can result in fin rot.
Occasionally opportunistic fungii (Saprolegnia) can also result in fish rot, often taking advantage of fish weakened by other causes.
See a picture further into this article for a picture of a Betta with Columnaris induced fin rot.

It is also noteworthy that often the healing process includes a stage of black edges on the fins, THIS IS NOT A DISEASE! Thinking this black edge is fin/tail rot while continuing to treat with medications only makes pathogens more resistant and can degrade the bio filter too.
It should also be pointed out that often if the fin/tail rot has progressed well into the "ray" full regeneration fins simply will NOT happen!

As we treat fish fin & tail rot, we have to remember that we are both fighting infection and promoting healing. Continuing to add antibiotics after infection or danger of infection is gone is not necessary and may actually cause more harm than good (as it is can harm the bio filter bed and lead to bacterial resistance).
If the fin rays are damaged, likely these will not grow back. Even external tissue often never fully returns (think about how many lizards can loose their tails, but it never fully grows back).
After infection or danger of infection has passed as healing progresses, at most, medicated slime coat products such as AAP Quinex should be used.

Finally, especially as per Bettas, genetics and age can lower a fish resistance to disease.
Unfortunately the popularity of bettas (& other fish) has led to the in-breeding of Bettas that has resulted in genetically weak fish. As well often these same less-than-scrupulous breeders will dump older Bettas on the market after their useful breeding life has passed, so a Betta you purchase may not only be genetically weak, but much older than you think! This is especially common of Bettas sold to discounters such as Walmart and chain pet stores.
The end result is a Betta that is predisposed to diseases, including fin rot, and even treatments that may work under normal circumstances will not with these fish.

Before any aquarium/pond fish treatment it is important to know all the steps as often treatment is much more than dumping medication into an aquarium.
Please read this article before ANY aquarium treatment regimen:
Fish Diseases | How to Treat Sick Fish

As well as this complete article:
Aquarium Medications, Part 1; Water Changes and more

Here are several points, generally in order of importance to check if your Fish (Betta or otherwise) has or continues to contract symptoms of fin rot (please note that many if not most cases of fin/body "rot" are environmental, so fixing/correcting the environment is always important):

Other Suggested Reading is:
*A Healthy Aquarium, Disease Prevention

Even suggested steps such as the use of a Level 1 UV Sterilizer should be considered if at all possible, although usually not practical for the average Betta owner.
However with larger Betta Breeders or similar multi Betta specimen tanks with dividers, the use of a UV Sterilizer may be practical.
Make sure is you are able to employ a UV Sterilizer that you change your UV bulb every six months for optimum efficiency.

Hikari Betta Gold Floating Pellets
Includes Astaxanthin, which helps enhance coloration, along with Grape Seed Extract has been shown to reduce the impacts of aging


For a friendly, Knowledgeable, aquarium forum with in a family atmosphere:
Aquarium Forum; Everything Aquatic