Hydrogen Sulfide is unfortunately often a companion of anaerobic de-nitrification, of which denitrification is an important aspect of keeping low nitrate levels in both salt and freshwater.
This said, it is important to achieve de-nitrification without undue amounts of Hydrogen sulfide produced, but often this is difficult since both are byproducts of organic breakdown in environments that are either mostly devoid or totally devoid of oxygen. However within the last point is part of the answer as well!!

Hydrogen sulfide (sulfate reduction) generally results from the bacterial breakdown of organic matter in the total absence of oxygen, where as de-nitirifcation (nitrate reduction) that lowers nitrates while producing free nitrogen generally happens in an environment that is mostly devoid of oxygen but not completely devoid as in hydrogen sulfide production.

With the most current research (although admittedly not conclusive in my view), you CAN have anaerobic de-nitrification and NOT have dangerous levels of Hydrogen Sulfide produced in both fresh & saltwater. With healthy de-nitrification it is possible to have low nitrate levels below 20 ppm

What these points show is that the hydrogen sulfide production in substrate is only common when the area of sulfate reduction in question is totally deprived of oxygen and nitrates.
This can be demonstrated with a canister filter or FSB filter that ceases operation (due to power filter, mechanical failure, etc.).

As long as very small amounts of oxygen and nitrates can penetrate into the substrate (or live rock), this will not become a problem.
This same general idea holds true for man made de-nitrators that have no oxygen whatsoever and are not bathed in adequate nitrates. This also can be demonstrated with a canister filter that is set up with products such as Matrix, Bio Home, or Volcanic Rock where as even marginal oxygen penetration should keep the filter from producing hydrogen sulfides. Ditto a FSB filter operating with a large/tall reaction chamber or using nitrate removal products such as NPX Bioplastics

Light energy has also been shown to be a factor in destroying rogue hydrogen sulfide molecules in the water and penetrating into some layers of substrate as well. 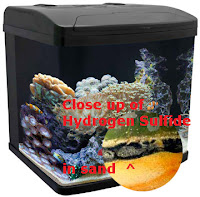 A tell-tale sign of Hydro Sulfide production is black areas in the deep areas of sand or substrate, whether freshwater, marine, or especially ponds.
The rotten egg odor is another sign, although as Hydrogen Sulfide levels in the air increase, research has shown that human’s olfactory senses tend to block out the smell somewhat.
However the smell test is still useful when one stirs up substrate releasing large amounts of trapped hydrogen sulfide bubbles which if your nose is just above the water's surface, the tell tale rotten egg smell is easy to detect. If bubbles released upon stirring the substrate do not produce a smell, likely the majority of these trapped gasses is nitrogen from beneficial nitrate reduction.

Please see the picture to the left of what the "black" Hydrogen Sulfide producing layers look like in sand (click picture to enlarge).

Hydrogen sulfide is toxic to a wide range of organisms, including people, which is a FACT that has been known for many years.
It is just now becoming clear, however, that hydrogen sulfide also appears to play important roles in normal biochemical processes in animals. Neurons and muscles, for example, may use it in various ways, but exactly how this takes place has not been made clear scientifically.

One way that hydrogen sulfide exerts its toxicity is by inhibiting a mitochondrial enzyme called cytochrome c oxidase.
It can be inhibited at hydrogen sulfide levels in solution as low as 30 ppb.12
Such inhibition limits the ability of mitochondria to produce energy for cells. Another enzyme, catalase, is inhibited at concentrations of 6,000 ppb.12
Other mechanisms of toxicity are also likely, and have recently been studied.

Being that hydrogen sulfide is heavier than air, it can accumulate at the water surface if there is not adequate ventilation above the aquarium tank which in turn cuts off oxygen from entering the water resulting in livestock deaths. Look out for gasping fish as a possible sign. 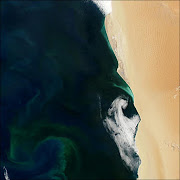 Hydrogen sulfide eruptions happen frequently off the shore of Namibia because of patterns in the ocean currents called upwelling.
In this region, cold water pushes nutrients from the ocean floor to the surface, where ocean life thrives.
In particular, large colonies of microscopic ocean plants, phytoplankton, grow in the nutrient rich water, forming the dark green swirls seen in this image.

As the plants use all of the nutrients, they die and sink to the sea floor where bacteria consume them. The bacteria release toxic hydrogen sulfide gas into the soil. Eventually, the toxic gas erupts from the soil.
In addition to the bright waters seen by satellites, the event is marked by massive fish die-offs and a strong smell that resembles rotten eggs. To date, hydrogen sulfide eruptions have only been observed off the shore of Namibia

Please click the picture to the left to enlarge.

HOWEVER hydrogen sulfide toxicity problems aside, I have observed and the most up to date scientific evidence supports that an aquarist or pond keeper CAN maintain de-nitrification without the worry-some production of hydrogen sulfides

Algone Nitrate Reducer
Algone is an excellent product to utilize to lower nitrates, as enzymes in Algone break down proteins, carbohydrates and metabolic waste into insoluble complex structures 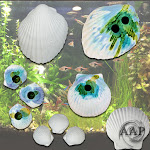 Aquarium Wonder Shell; ONLY Authorized full online seller
The most simple and proven effective way to maintain healthy mineral cations in your aquarium. Beware of parasite retailers online. ONLY AAP is authorized to sell the full line of FRESH Wonder Shells, both Medicated & Regular

SunSun HJ-1542 Aquarium Pump; replaces Via Aqua 1300
This pump replaces the Via Aqua 1300 and other copies such as by AquaTop as the Premier Power Head Pump for Aquariums, Ponds, Fountains, Wet/Dry Filters. This pump is submersible with Mag drive & ceramic shaft