Hole in the Head, HITH, Hexamitiasis (Hex) Disease in Fish, 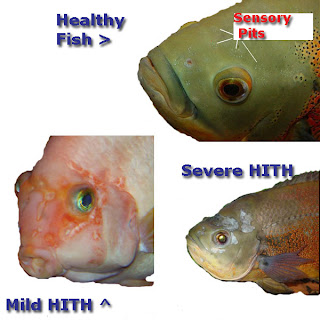 HITH; Hole in the Head Disease in Fish

I have had a lot of questions directed either to me or through the forums that I am active in about Hole in the Head Syndrome, often simply identified as HITH.
I will start off with by saying that I do NOT know everything there is to know about this disorder only to say that I have had a lot of experience in treating and controlling HITH in fish afflicted with this problem in my maintenance business over the years.

I will also note that I NEVER had an outbreak in the last 30 years of my business due to proper care of fish prone to this disorder.
In the last few decades, every case of HITH I dealt with was with a customer that called me out to help with their sick fish.
Of all the regular contract clients I had, none, and I mean NONE, EVER had a fish contract this disease. This includes large clients such as the Bahooka Restaurant with over 110 aquariums, most over 75 gallons and many with fish such as Oscars prone to this affliction.
My point as readers will find after reading this article in full, is that prevention is the key.

I state this because there is a lot of anecdotal information about HITH or even simply half truths.

What is Hole in the Head Disease?

HITH or Hexamitiasis (aka Hex) is an affliction that primarily affects Gouramis, Angelfish, Discus, Oscars and other South American cichlids.
A Cichlid has spots on their head which are called sensory pits. These are a series of fluid filled sacs with tiny hairs that sense vibrations and convert them to electrical impulses. Along the lateral lines, sensory pits are responsible for a fish's equilibrium in the water and look like little pin holes, generally arranged in a cluster.
In a HITH outbreak these sensory pits become eroded with ulcerated lesions which expand and coalesce together, forming larger crater-type lesions. They can extend deeper into the muscle and even down to the skull. These open lesions may become secondarily infected with bacteria or fungi and such secondary bacterial infections that may result in death.

A common theory is that HITH is caused by non-absorption of minerals (such as calcium) and vitamins (primarily Thiamine; Vitamin B1) from the intestine due to heavy concentrations of flagellate parasites, like Hexamita.
The importance of Calcium and other electrolytes in aquariums, ponds

It is sometimes believed by aquarists that the protozoan parasite Hexamita caused the skin erosions and therefore treatment is based on attempting to eradicate Hexamita by treatment with Metronidazole.
This is where a half truth does come into play; Often there is a misunderstanding as stated above as to the root causes, however there is also a misunderstanding of what Metronidazole is effective against.
In this article I will not go into detail about Metronidazole other to say that it IS effective against many bacterium and parasites, especially intestinally which can effect absorption of important minerals and vitamins, WHICH IS WHY Metronidazole has been effective even when the cause was misidentified. The bottom line is Metronidazole is both anaerobic anti-bacterial AND anti-protozoal.

As someone who sells Metronidazole and has used it, I certainly believe it has benefits, HOWEVER please let me be blunt and state again that with any suspected HITH problem, always start first with water parameters and diet, then MAYBE Metronidazole.
Quoting from a Doctor who works with refugees whom I just listened to a talk from; He noted many are trained to administer Metronidazole to refugees suffering from malnutrition, and severe dehydration resulting in life threatening diarrhea. He stated world health practices has found this to be totally wrong!
He noted that first get fluids and osmotic balance/electrolytes, and most often the patient will recover without Metronidazole and only administer Metroniazole after recovering the patient from the diarrhea.
DITTO YOUR FISH!

Back to Hexamita flagellates, these protozoans main effect as to causing HITH appears to me more indirect as this flagellate protozoan absorbs many of the nutrients in the digestive tract needed by the fish, in particular Thiamine and calcium.
So removal of these parasites with Metronidazole is certainly a worth while aspect of treatment (their presence which can be confirmed by microscopic slides), however this again is just half the problem as correcting nutrient problems is as important or possibly more important.

Thiaminase (an enzyme that metabolizes or breaks down thiamine) is also considered a problem that may be a problem in fish afflicted with HITH.
Thiaminase is introduced via feeding fish such as Goldfish/Fathead Minnows, or via bacteria. Thaimase breaks down thiamine, and thiamine is an important vitamin necessary for carbohydrate metabolism and normal neural activity.
If "feeders" (goldfish sold for the purpose of feeding other fish) are fed as a large portion of your fish’s diet, it likely will develop a thiamine deficiency.
Although many dry prepared foods contain fish flesh that also contains Thiaminase, however the process required to prepare a dry food/pellet likely destroys this enzyme.

There is not conclusive proof that this is a cause of Hole in the Head as Thiamine derivatives and Thiamine dependent enzymes are present in all cells of an animal organisms body, thus a thiamine deficiency would seem to adversely affect all of the organ systems.
However, the nervous system and the heart are particularly sensitive to thiamine deficiency, due to their high oxidative metabolism. This adds questions to this theory in my opinion.
However my own observations and limited tests certainly lead credibility to this theory.
What is also not clear is why this is more of a problem with certain fish and as well, whether the lack of Thiamine is by itself a cause of HITH. Personally I have found that with gut loading of feeders, improved mineralization and Redox that HITH ceases to be a problem even when feeder goldfish are a major part of the diet.

For a related discussion about HLLE, please see this Aquarium Answers Article:
The Lateral Line in Fish as well as Lateral Line Disease or Head and Lateral Line Erosion (HLLE)

This is also an area where many half truths are present (and quite honestly much is to be learned as well).
Obviously diet plays a role here, as well as water quality such as Nitrate levels, however what is sometimes missed is the role Calcium (in particular calcium cations) plays in proper osmoregulation and the fish ability to absorb other nutrients.
Often poorly maintained aquariums will see high amounts of acids, poor Redox reduction, high DOC (dissolved organic compounds), and low GH and KH (low GH or positive mineral ions). I have also noted in my service calls that the aquarist (usually with South American fish such as Discus or Oscars) was told to keep a low GH; unfortunately this is a misunderstanding of GH, Redox, and the need for calcium (even in at least small amounts in South American biotope aquariums)!

I would recommend reading this article for further information about the importance of proper Calcium levels in ALL aquariums (even Discus!):
“The Importance of Calcium, GH, KH and Electrolytes in Aquariums”

The Redox Balance (in particular lowering oxidative stress) also plays a more crucial role in prevention and treatment of HITH, as an aquarium that has a poor Redox Balance will likely never allow for recovery from HITH. Redox is directly influenced by a constant supply of mineral cations (found in part in GH), water changes, and mulm buildup.
As well, UV Sterilization has a positive affect on Redox, assuming regular changing of the UV Bulbs. To remain effective, the UV Bulb MUST be changed every six months with a premium high UVC output low pressure lamp, NOT one of the cheap ones that have only 25% of the UVC output commonly sold on eBay & Amazon for prices lower that it cost to make a low pressure HO UV bulb/Lamp.

In the end though, often a fish severely afflicted with HITH cannot be totally cured, rather the progression of this affliction can be checked.

STEPS TO TAKE FOR CURE/CONTROLLING/PREVENTION OF HITH (HEXAMITA):

Aquarium Information
The largest data base of aquarium information available on the Web.

Fish Treatments, How They Work, Which to Use and Not to Use 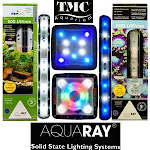 AquaRay Ultra Premium Aquarium LED Lights
Highest in PUR, The ONLY LED with an IP67 rating or higher for water proofing along with a full 5 year warranty to back them up!
Why purchase brands without this rating such as the Finnex, Current, or Fluval only to be essentially placing an electronic light emitting device over your humid aquarium with little or no guarantee? In the long term, you WILL PAT MORE! 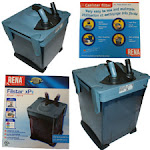