A Chocolate Chip Starfish (Protoreaster nodosus) are found in warm areas of the Pacific Ocean, Indian Ocean and the Red Sea. They live in shallow tidal pools and reefs up to 100 feet deep.
They feed on sponges, bacteria, waste products and the remains of dead plants and animals. Chocolate Chip Starfish hunt with their sense of smell.

Starfish eat with a mouth not visible from above. Their mouth is actually on the underside of the starfish's body.
In order to pick up the food they consume, they cover the food with their body and push out their stomach from the inside.
In the aquarium they are basically a scavenger, although often make sure they eat by placing them on a cut piece of fish or similar.

Chocolate Chip Starfish as well as the Marble Starfish are mild to medium aggressive and will go with many fish, but not with triggers and a few other predatory fish.
They are OK in a Nano reef WITHOUT corals or delicate anemones. CC Starfish are fine with Hermit Crabs, Turbo snails, Feather Dusters and less delicate anemones such as Long Tentacle Anemones. 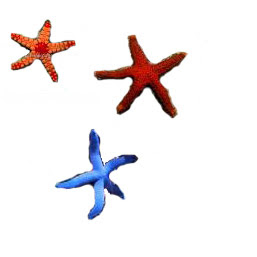 The Fromia family of starfish are more reef compatible with delicate anemones and corals (although I stll advice some caution).
The Reds, Marbles, Blues and others that make up the Fromia family are NOT as hardy in my experience and should NOT be added to a new marine aquarium, I personally advice waiting about 3 months.

The Chocolate Chip and Marble starfish can be added sooner and are less delicate, however these are still not the best “first” inhabitants in a marine aquarium in my opinion.

Starfish spawn which means they release eggs and sperm into the open ocean at the same time. Females can produce up to 65 million eggs per spawning season.
During spawning season thousands of starfish gather and release sperm and eggs into the ocean. The egg and sperm join and produce many tiny sea stars which float in the water like little blobs that later form into a star shape.

They can also asexually reproduce.
They also can regenerate their body. If another creature attacks the starfish and eats or tears off an arm they can regenerate arms. As long as the main body is not injured they can re-grow.

Here is the full classification of Chocolate Chip Starfish:

For the VERY best in Lighting for your starfish and other reef inhabitants: 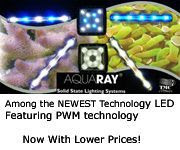