SEXING FISH; The differences between males and females (if any).
By Carl Strohmeyer-PAMR 40+ years experience
Updated 1/22/19

I will first point out that the ability to relatively easily sex fish depends on the fish; and for many newer fish keepers sexing can be very difficult.

I would also like to point out that although some articles here at Aquarium Answers are intended to be more in depth, THIS ARTICLE is intended to just cover the BASICS and advanced aquarists will need to seek further information elsewhere.
I provide several links to other sites and articles for more expanded information, please check them out as well.

Although information about the breeding of fish is not the main intention of this article, I will provide a few basic factors to consider for many fish developing into a breeding condition (where by "sexing" of the fish is more likely to be successful too).

Simply put, maintaining good water conditions is a must, this includes 0 ammonia or nitrites, low nitrates, a stable pH, at least some positive mineral electrolytes (some fish need more than others for positive breeding conditioning).

Often successful breeding is performed in bare, no substrate aquarium; this in part aids in the ability to vacuum and wastes as soon as it falls and limits the possibility of devastating Saprolegnia outbreaks in fish or eggs.

Another key point is while many breeding fish prefer at least some quiet calm areas to breed or rest, at least SOME filtration MUST be present. I base this on the FACT most breeders as well as my breeding of fish have been in tanks with some sort of filtration. Generally speaking, an air driven Sponge Filter is your best choice for this.

A Resource for:
Aquarium Sponge Filters

HERE ARE A FEW BASICS OF SEXING FISH: 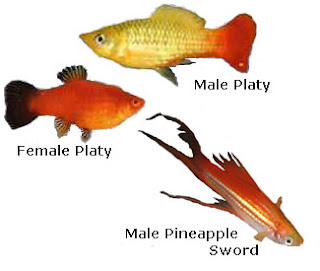 Guppies more transparent bodies (although many other light colored livebearers are similar here) are easier than many livebearers to see fry development inside the female.

Signs that your guppy or other livebearer is about to give birth include a large belly, a box like look from the front view, and a darker gravid spot which is under the pregnant females tail, which many identify as a stained glass window where the fry come out.
As the babies near birth you can sometimes see eyes of the unborn fry as tiny black dots.
Click picture of guppy to enlarge

The gestation period in livebearers, which the interval between fertilization and live birth can vary, however as a generalization this time period is about 4-6 weeks at 78 F. The size of the brood can also vary greatly.
Most livebearers prefer water higher in mineral ion content and although salt is not required by most livebearers, it can be helpful as well.
Keep optimum conditions including proper mineralization as well as supplementing their diets with frozen/live/FD foods along with quality flake, crumbles, & conditioning foods (I would strongly suggest foods high in spirulina such as Spirulina 20 as well as ultra premium staple diets such as "Clay Neighbor's AAP All Natural" Premium Optimized Custom Fish Food Crumbles).

As for the fry, I have achieved phenomenal success by simply powdering Spirulina Flakes at the time of most of my livebearer breeding, of which I had several tanks of Platties alone. I was using Green Flake Plus which is currently not available, but similar products such as Spirulina 20 still are. I also would supplement them with frozen baby brine shrimp or microworms.

Most livebearers of both sexes will eat their young so separation of all other fish is best and the use of a heavily planted aquarium (live or fake) or breeder trap for the female is advised.
Both swords and platties are capable of cross breeding as are Mollies and Guppies.

For further information please read my article about the care of Mollies (of which the care for other livebearers is similar):
Aquarium Answers: Keeping Mollies in an Aquariums 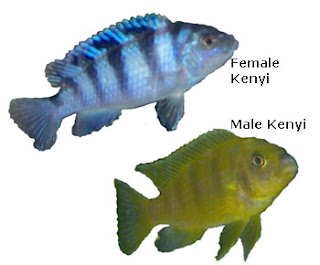 In Cichlids some species, males and females are readily distinguishable by color, size or shape.
For others it is difficult or even impossible to tell the sexes apart in non breeding individuals.

Here are a few specific methods to sex certain Cichlids: 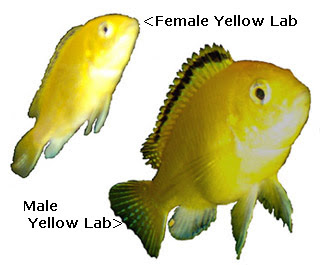 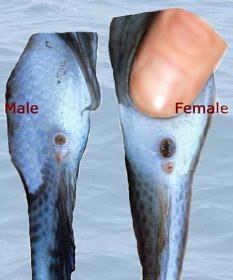 Here is a tip as to determining Mbuna African Cichlids from Jon V. (from "Everything Aquatic"):
"When you get a group of fry or brood, keeping them in their own grow out tank for about a month. During this time as you feed fry foods, watch the group to see who's getting the most of the foods. Even at that early age, I've seen a tendency which I think is noted in other forums, that males will even be aggressive for food as early as the first few days when released. After about one month of this, you can take a brood of say about 20, and the ones that have already grown out larger then the others, you have about a 75-80% chance, those are males. While I've seen on some occasions, females grow rather large early on, I find this has great accuracy when comparing the first and second months of age."

See this article from Jon V from Everything Aquatic:
Venting cichlids to determine sex

Sexing Goldfish is very difficult before they reach sexual maturity.
One way to tell is by looking at the shape of the vent. Females may have rounder convex vents while males have thinner concave vents.
The pectoral fins of males may be rather thick and stiff (compared to those of female goldfish) and with a more pronounced outer ray.

Another way to tell is by male goldfish will developing breeding stars on their gill covers and along the first ray of their pectoral fins when they are ready to breed. 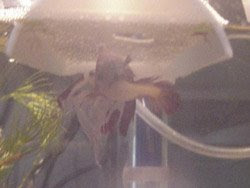 Male Bettas in the wild are short finned, so fins are not as reliable a way to tell the sex in bettas and is common belief.

Here are a few ways to improve the accuracy of sexing your betta:


Taken together you can give a much more accurate assessment of your Bettas sex.

See this article for more about Betta Habitat of which this knowledge may help in stimulating Betta Breeding behavior:
Betta Wild Habitat

Cousins to the Betta, in which both have a labryinth organ, which allows them to breath air directly. Both also come from SE Asia.

Many Males can be differentiated from females by the shape of the dorsal fin, which is long and pointed in males, compared to the females' shorter and more rounded dorsal fin.
Females that are prepared for spawning will show a pronounced swelling in the breast area, while the male will be more slender in the breast area.

In many Dwarf Gouramis, the males are much more colorful than the females (this is not usually true from my experience with other Gouramis such as blues).
Please note that these are generalizations and do not apply to all Gouramis. 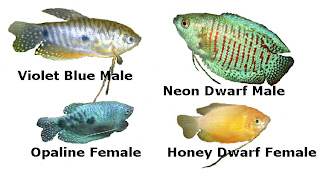 Currently I have not found any in depth articles about Gouramis (other than species specific) that I can recommend.
Either I will write one at some point in the future (as I did for mollies) or if one is brought to my attention, I will post it.

Aquarium and Pond Information -A useful source for current

UV Sterilization for Aquarium or Pond
A MUST READ article for anyone looking to move up from basic to more advanced fish keeping!!

FISH AS PETS
Fish as Pets with articles & commentary of Interest to the Aquarium Hobby
Including articles such as this one:
Melafix Dangers; Effect of Water Parameters on Melafix when used for Bettas, Labyrinth Fish