Whirling disease is a disease of freshwater fish caused by the myxozoan parasite Myxobolus cerebralis. This infection/infestation is most commonly found in the wild found in the salmonid family of fish, however is not very common with most fish kept in aquariums except under the right conditions and that come from certain sources.

What is noteworthy mostly for prevention is that the parasite has two hosts — the fish itself and a freshwater oligochaete worm, popularly known as the Tubifex tubifex. This is a major reason these worms should not be fed, but unfortunately are a common source of cheap protein for many fish farms, especially those selling to discounters.
This has been documented in particular with Cichlids coming from certain fish farms. 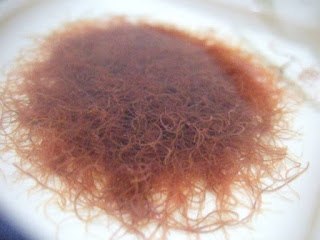 There are two spore stages for Myxobolus cerebralis, one released from the fish and infective for worms, the other released from worms and infective for fish. Generally, the earlier the fish is first exposed and the higher the parasite exposure dose, the greater is the severity of the disease.
Water temperature also has an influence on all stages of the parasite life cycle since it slows its cycle over 70°F (21°C), as spores are released from the worm host when the temperature is between 10°C and 15° C.
However once infected, and while a higher temperature will check the spread, it will not significantly help for an infected fish based on my experience.

"Whirling Disease" gets its name from the radical tail-chasing swimming behavior of heavily and often fatally infected fish.
Clinical signs result from the presence of the parasite spores in the cartilage, causing inflammatory changes and pressure on spinal nerves. However, fish may become infected with the parasite and never show clinical signs; resulting in a difficult positive diagnosis of infection in these fish. 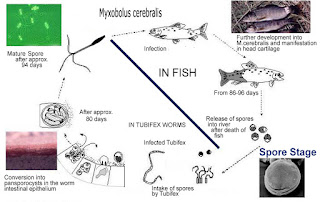 
This video below shows a trout with advanced "Whirling Disease", also displaying darkening of the tail that sometimes occurs in advanced stages.

*Ichthyophonus in Fish
A similar disease in both symptoms and the fact both are more common in cooler waters or carried from cooler waters. 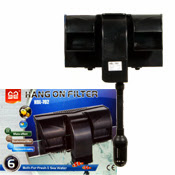