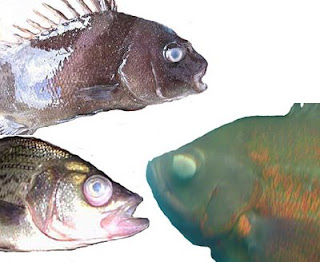 The most common symptom these bacteria will show as cloudy eyes and although majority of most aquarium bacterial infestations are gram negative, most eye infections are generally gram positive and caused by Streptococcus or related bacterium

Occasionally Aeromonas in freshwater or Vibrio in saltwater will show up as eye infections, especially in “Pop Eye”. In this case, following treatment for Aeromonas and Vibrio are is recommended as these are gram negative anaerobic & aerobic bacteria.

Please see this article for more:
Treatment and Identification of Aeromonas and Vibrio in Aquariums and Ponds

Although “Cloudy Eyes” (corneal opacity-whitish eyes) is the most common symptom of these gram positive infections, other symptoms are possible such as:


On rare occasions Streptococcus may be a cause of Dropsy.
As well some cases of “False Neon Tetra Disease” (FNT) may also be caused by Streptococcus.

Often fish with Streptococcus iniae infections will not eat, which can complicate treatment for this bacterium when it is internal, especially for freshwater fish which do not drink water they are contained in (unlike most marine fish).
Further Reading: Do Fish Drink?

Most bacterial diseases of fish are opportunistic (such as Aeromonas or Columnaris).
Streptococcus on the other hand, does not seem to be a truly opportunistic pathogen, as it can be more aggressive than many other environmental bacteria.

In one experimental study (Ferguson et al. 1994), populations of zebra danios and white clouds exposed to high concentrations of Streptococcus in the water experienced 100% mortality within 2-4 days of exposure.
For this reason it is important that Streptococcus infections be quickly identified and managed to prevent major losses.

It is also noteworthy that recent studies have also shown growing incidents of this bacterial infection in fish farming, which is where most of the research into Streptococcus in fish is made available from.
In fact this problem has become severe enough among Tilapia and Trout farms that a vaccine is now in the testing phase for Streptococcus iniae.
Reference: First Live-Attenuated Vaccine for S. Iniae in Development

Fish that have been documented most susceptible include rainbow sharks, red-tailed black sharks, rosy barbs, danios, and some tetras and some cichlids.

For most “full blown” Streptococcus infections (not necessarily a mild eye infection), Erythromycin Phosphate is often the drug of choice.
Mortality should cease within 48 hr of treatment with the correct antibiotic if complicating factors are not present.


If the disease is internal, this therapy may be difficult because commonly sold erythromycin sulfate does not absorb well, and this case treatment with Neomycin enhanced foods foods is recommended.
Further Reading: Aquarium Medications; Fish Food Delivery

It should be noted that although Erythromycin is the drug of choice, because it is an effective anti gram positive bacterium medication, it is also very hard on nitrifying bacteria, so having cultured sponge filters or other “seasoned” filter media to replace during and/or after treatment is very important since Streptococcus is not opportunistic. Many opportunistic bacterium such as Columnaris may follow, especially if ammonia/nitrites rise during or after treatment.
Further Reference: Aquarium Nitrogen Cycle; Use of Medications

Although generally the antibiotic of choice, sometimes Streptococcus bacterium can build a resistance to Erythromycin (as well sometimes destruction of tank environment from the use of Erythromycin can be a double edged sword that renders this antibiotic ineffective especially if tank conditions are not closely monitored).
In this case, Doxycyline or Tetracycline Hydrochloride may be a good substitute with Doxycyline more often being the better choice.

Tetracycline is not without its side effects either and its use can severely lower red blood cell counts in fish, so increasing circulation is a must.
As well, it's hard on nitrifying bacteria and tends to cause a buildup of brown foam. Tetracycline or Doxycyline should never be combined with Erythromycin.

Other Potential Treatments Include Combinations Of:


Melafix is a reasonable preventative treatment and may be effective for mild Streptococcus infections.
Sometimes for very mild eye infections (no other symptoms) Melafix is the only "in-tank" treatment you may need to use (outside of direct application of treatment).
Further Reading: Aquarium Medications Part 4; Organic Treatments 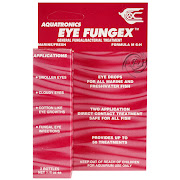 Another choice is Merbromin, which too can be swabbed, painted, or dropped directly on the eyes. While not as effective as the Silver Nitrate/Potassium Dichromate combination, it is also easier to use.

Potassium Permanganate is reasonable third choice for this direct eye application and Methylene Blue a forth choice for direct application.
Either way, sometimes the only “in tank treatment” that may have to followed up with when the eyes are treated directly is Melafix or Melafix/Pimafix combination(used in the main tank or hospital tank, not in a bath).

Medicated Baths may also be a very useful part of treatment for external Streptococcus infections in fish.
These would be twice daily for 30 minutes and I recommend the use of Methylene Blue combined with a double dose of Erythromycin or Tetracycline, or even Usnea

If you suspect that you have a group of fish with a Streptococcus infection, the affected population should be isolated from all others. If possible, have dedicated equipment (nets, siphon hoses) for these fish.

Since Streptococcus is not as opportunistic as discussed earlier, prevention is VERY key to stopping this bacterium. This would include UV Sterilization, medicated baths or quarantine of ALL new fish and if at all possible:
See these articles:
* “Aquarium Disease Prevention”
*UV Sterilization for Aquarium or Pond; Why it should be used

Although Streptococcus does seem to occur more frequently at warmer temperatures, it can occur at any time of the year.
Studies in marine systems in Japan Kitao et al. 1979, indicate that Strep may be present in salt water and mud, with higher incidence in the water during summer months.
Source: Distribution of Streptococcus sp. in Seawater and Muds around Yellowtail Farms

Nets, siphon hoses, vacuums, etc should ALL be soaked in Potassium Permanganate (or even bleach) prior to use in other tanks if you have more than one aquarium.

Use of anti-septic treatments such as Melafix, especially after injury or similar is helpful for prevention or even treatment early in Streptococcus infections.
Think of it this way, many human infections (including Staph) are common and simple treatments with products such as Neosporin is all that is necessary in minor injuries to prevent a major infection.
Although Melafix has little or NO anti gram negative bacterial abilities, it is an excellent preventive even for diseases such as Columnaris from getting a “foothold” by killing off disease pathogens such as Streptococcus that may be followed by Columnaris.

Are you looking for an informative and friendly Aquarium Forum to help with your fish problems (or simply to share your experience)?
Consider this forum with a friendly family atmosphere:
Everything Aquatic Aquarium Forum

The Premium ATI Hydro Sponge Filter, from the only online seller with professional use dating back to 1978 (prior to the Internet)

UV Bulbs; Page 1
As noted above, changing these PREMIUM bulbs/lamps every 6-12 months is essential for a properly functioning UV Sterilizer

The best in Quartz, Under gravel, and Titanium Submersible Heaters: